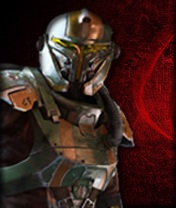 I was bred for battle on the planet Kamino and battle is what I know. I live and breath for it. I was raised as cannon fodder but now lead Legions, Kamino was where I was trained and raised and it was there my story began.

The year was 32BBY, it was then that I got my first glimpse at the world and all those in it. My first thought was not of a hunger for a warm meal but that of a soldier, even at that stage ... as a babe. But I soon realized I was not alone, a gray figure ominously looking at me with a plan to make me into a trained soldier ... a real soldier.

I was selected before I even had a name to lead men into battle. I made my way into the upper Echelon of the 212th Attack Battalion and proved my worth to my commanding officer. We participated in many honorable battles such as Concord Dawn, Geonosis and several others. I live by the resol'nare or "six actions" as known in Galactic Basic. I have burned many worlds and will live to burn many more. I fight, I bleed, but a blaster cant seem to kill me. I rally to fight beside my brothers In battle. Honor in battle is what I live for And war is what I do best.